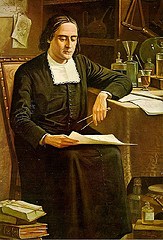 It was mainly because of his parents influence that Bartolomeu has dedicated himself to an ecclesiastical life. He was born into a big family, and had a total of 11 brothers and sisters; and he started studying for a career in the clergy at a very tender age, and later on he moved to Salvador, where he entered the Jesuit Seminar of Belém da Cachoeira, in Baía. When he finished the seminar, Bartolomeu moved to Salvador, and joined the Company of Jesus; shortly after, in 1701, Bartolomeu left the Company, even before he was ordained. On the following years, he divided his time between Brazil and Portugal, having obtained his ordination in Brazil first, and then continuing his studies in Portugal, where he graduated in Religious Right at the University of Coimbra.

Even though Bartolomeu had an unremarkable capacity for speech, grabbing people’s attention easily, he choose to dedicate his life to his studies and inventions, where he was also very successful, being the inventor of a lot of gadgets and devices, most of all related to the “art of flying”.

During the period he lived in Portugal, Father Bartolomeu established very close relations with several members of the nobility and from the court, ended up being introduced to the King D. João V, and afterwards he was even nominated chaplain of the Portuguese Royal Family, in 1722.

In his efforts as inventor, Father Bartolomeu divided his time between lots of different projects, but the aerostat was the invention that brought him more recognition, and to which he was more dedicated; the aerostat was nothing more than an archaic hot air balloon, and besides designing the project and constructing the device, he also made several public demonstrations, some of them very successful, where he was able to lift the balloon up in the sky.

During his life, Father Bartolomeu de Gusmão took also quite some time to discover the world, not only because of his constant trips between Portugal and Brazil, but he also traveled throughout Europe, between 1713 and 1716, a period in which he kept a record of new inventions and projects.

Father Bartolomeu Lourenço de Gusmão died at only 39 years of age, in 1724, due to a disease. At the time he was in Toledo, Spain, since he had to leave Portugal because he was being pursued by the Portuguese Inquisition that accused him of supporting New Christians.

The Portuguese writer and Nobel prize winner in Literature, José Saramago, brought back the memory of Father Bartolomeu, making him one of the main characters of the novel “Baltasar and Blimunda”, in which he is responsible for the invention of the “Passarola”, a flying device that has an important role in the narrative, and that represents dreams, ambition, innovation, and the will to always move further.